Did you catch the Grammys last night? Was I the only one that thought Katy Perry slightly resembled a Dragonfly?! (Phys.org) —Will the extremely cold weather Texas experienced recently have any effect on insect populations this spring?

“It depends upon the insect,” said Vafaie.

Red imported fire ants, for example, burrow down so deeply in the soil that they’re unlikely to be affected by cold weather, Vafaie said.

“They tend to be quite ‘insulated’, if you will, from the extreme temperature changes—unless there’s a very long sustained cold, which may slowly make its way down into the depths,” he said

It’s been suggested by other entomologists, Vafaie said, that a colder winter may reduce the populations of mosquito species that carry West Nile virus during the following summer.

“However, we don’t know for a certainty, and since this winter has been quite a unique one in Texas, we’ll have to wait and see how insect populations have been affected.”

What is known is that insects generally have several biological mechanisms for dealing with cold weather, even extremely frigid weather like large parts of Texas had in late December.

Vafaie’s previous work under the supervision of Dr. Brent Sinclair, a prominent insect low-temperature biologist in Ontario, Canada, gave him a strong foundation and knowledge on insect cold tolerance, he said.

“There are many places that often experience much cooler climates than Texas, such as Toronto, that had below minus 20 this December,” Vafaie said. “Although it may seem as though our little insect friends would not be able to live at such low temperatures, many have adapted the ability to survive in such environments.”

Generally speaking, insects have three main strategies for dealing with the cold: freeze tolerance, freeze avoidance and migration, he said.

“Internal ice formation would kill most organisms, but some insects have specialized mechanisms to deal with ice,” Vafaie said. “Some insects, such as the woolly bear, a moth larva, and goldenrod gall fly larvae, can tolerate freezing by the use of specialized proteins.”

He noted that though such insects are termed “freeze tolerant,” if they are taken from the field during the summer and placed in a freezer, they aren’t likely to survive.

“Typically, certain environmental cues are involved. For example, shorter days and cooling temperatures may induce mechanisms that help the insect tolerate freezing,” Vafaie said. “When the weather warms back up, they thaw and become active again.”

Other insects cannot tolerate freezing, but have other mechanisms to prevent ice formation in their cells, he said.

“We call 32 Fahrenheit the freezing point of water, but the temperature at which ice forms depends on the content of the solution,” Vafaie said. “For example, saltwater at a concentration of 23.3 percent may not freeze until the temperature is minus 6 degrees Fahrenheit. In the same way, some insects use certain compounds called ‘cryoprotectants,’ similar to the ethylene glycol found in your car’s antifreeze, that lower the temperature at which freezing occurs. This helps them survive at subfreezing temperatures.”

The third strategy, migration, is also commonly used by some species of insects. In East Texas, one of the most common examples of this strategy is the fall armyworm, he said.

The fall armyworm is actually the larval form of a migrating moth, he said.

Fall armyworm moths migrate in the millions northward from South Texas in the spring and summer. Upon arrival, each moth will deposit a clump of 50 or more eggs on individual blades of grass. When the eggs hatch, the larva quickly go on maneuvers en masse for food. They will move across pastures, devouring wide swathes of grass in their wake, like an advancing army, hence their name.

Another migratory example is the monarch butterfly, Vafaie said.

“Monarchs migrate to Mexico and Southern California every winter,” he said.

One thing that may defeat many of these survival strategies, however, is when there are multiple incidences of very cold weather with warm temperatures in between. Such rollercoaster weather can decrease insect survival or reproductive potential, according to Vafaie.

“It’s not that they don’t have strategies adapted to deal with frequent temperature variations; it just comes at a cost, for example survival or reproduction,” he said.

But even when winter knocks back survival numbers, nature has a way of adjusting, Vafaie said.

“Due to the relatively short generation time of some of our biggest pests, like aphids, whiteflies and mites, their populations can grow exponentially even if winter survival is low.” Two Minnesota state agencies are working on ways to make the environment healthier for bees.

The issue is also likely to be a hot topic during the upcoming Legislative session because pollinating insects are important to agriculture. In recent years, they have become victims of a perfect storm. There are fewer flowering plants on the landscape, which affects insect nutrition. Honey bees suffer from persistent disease problems. Another serious threat comes from the neonicotinoid insecticide.

In the last several years, more than a third of the nation’s honey bee population has died each year, according to estimates from the U.S. Department of Agriculture.

Protecting pollinating insects will be a daunting task, said University of Minnesota bee expert Marla Spivak, who is working with a new team of university scientists looking for answers.

“I just spent the morning with a bunch of epidemiologists here on the chalk board,” Spivak said. “By lunch time they’re looking at this thing and going, ‘Oh my God, where do we begin?’”

Spivak said a growing body of scientific evidence shows that pollinating insects are affected by low levels of insecticide. But scientists still aren’t sure how much insecticide bees are exposed to as they travel from plant to plant.

The Legislature, which will consider funding some of the needed research, last year ordered the Minnesota Department of Agriculture to develop a process for reviewing the safety of widely used neonicotinoid insecticides, which are absorbed by plant roots, leaves and pollen.

Neonicotinoid insecticides are used to protect Minnesota crops like corn, soybeans and sugar beets. They also are commonly used in urban settings and in greenhouse plants.

State Agriculture Commissioner Dave Frederickson also ordered a regulatory review of the insecticides. A report due to the Legislature Wednesday will outline how the year-long review will proceed.

“This has been such an issue, a contentious issue, that I just think it’s incumbent on the Department of Agriculture to take a very serious look at it,” Frederickson said.

The review could lead to changes in how or when the insecticide is used. Frederickson says changes will be made only if the science strongly proves a risk to pollinators. Minnesota does have authority to impose regulations that are more restrictive than federal Environmental Protection Agency rules.

Frederickson said neonicotinoids are safer for people than other types of insecticides. But he said the risk to beneficial insects can’t be ignored.

“In significant doses it would be harmful to pollinators, pollinator insects,” he said. “So we have to be able to learn how to manage that or otherwise we’re going to have to figure out a way to replace it.”

“There’s a lot that we don’t know about pollinators and we expect the BMP’s and restoration guidelines is going to be a living breathing document and change constantly as we learn new things,” he said.

Any organization receiving state money to restore grasslands will also need to follow the new guidelines.

There will be no requirements for farmers to improve pollinator habitat, but Frederickson said farmers should consider ways they can create pollinator refuges on their land.

“For example, if you’re going to say we need to plant flowers on roadsides and not spray them,” Spivak said, “then how are we going to make sure people are not spraying their roadsides?”

“The change is really in my mind just starting to happen,” she said. “I mean we cracked open the door here. That’s kind of what we’ve done. Let’s barge through it now.”

Lawmakers also are hearing about bees.

State Representative Jean Wagenius, chair of the Environment, Natural Resources and Agriculture Finance committee, is surprised by the number of calls and conversations on the topic.

The public will have a chance to comment on the two departments’ plans over the next few weeks. Minneapolis residents will kick off their healthy bee initiative with a public meeting Thursday night.

In Lewis Carroll’s “Alice in Wonderland” a hookah-smoking caterpillar puffs out colorful words and boasts “a very good height,” at just 3 inches tall.

Like something out of Alice in Wonderland,  scientists have discovered a smoking caterpillar! View: Real-Life Smoking Caterpillar Uses Nicotine as Defense.

“While this find may not push Alice’s hookah-smoking insect from its psychedelic pedestal, this caterpillar is pretty snazzy, as it can use nicotine to ward off hungry wolf spiders.

The researchers found a gene in hornworm caterpillars that allows them to puff nicotine out through their spiracles (tiny holes in their sides), from the tobacco they consume, as a warning to their would-be predators. Researchers called this tactic “defensive halitosis.” [Video – See the Smoking Caterpillars in Action]“

Handling Your Pet After your new pet has had a day or so to settle in and check out its new surroundings, reach in and remove it gently from its nesting box. Do this during the day when it is sleepy and easier to handle. Put any other pets such as dogs, cats, ferrets, and large birds in another room because your glider might be frightened by their presence. While it is not harmful to pick up gliders gently and briefly by lightly gripping the base of the tail, this should not be necessary with a tame one. Never pull on a glider’s tail in order to extract it from its nesting box or pull it from wire or objects to which it is clinging. I have heard some horror stories about tails that have come off in people’s hands. Pick your glider up bodily and hold it in your cupped hands or against your chest. If the glider resists being picked up by gripping objects in his cage, put your finger behind his clams and gently push them off of the object. Once your glider has settled down, you can place it in your pocket where it will probably go back to sleep. Put your hand in the pocket and stroke your pet occasionally so that it will get used to your scent and being touched. Eventually, the glider will find the nerve to come out and explore a little. Let it climb up onto your shoulder and check you out. Don’t be surprised if it wants to climb through your hair. You can read more on the care of Sugar Gliders in our Free Glider Guides listed on the Sugar Glider Store website! 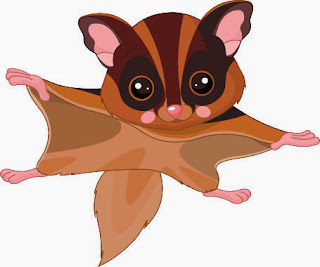 Read some of our older blog posts below

Insect Facts: What They Tell Us About Ourselves (PHOTOS)